Tima Kumkum: I haven’t heard from the father of my children in 4 years

Tima Kumkum said when divorce strikes in a marriage and the couple decide to go their separate ways, things sometimes get messy but in cases where children are involved, it is expected that both parties honour their duties in raising the children.

TV personality, Cynthia Tima Yeboah who is popularly known as Tima Kumkum has revealed in an interview on The Delay Show monitored by GhanaWeb that her former husband has failed to play his role in the lives of their two children following their separation in 2017.

Tima, in a shocking revelation, stated that she initially married her ex-husband to spite her 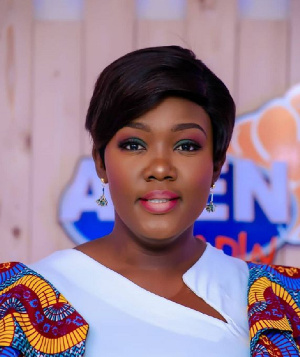 former lover but after things didn’t go as expected, she had to call it

Narrating her story she said: “I haven’t heard from him in years, I am the one taking care of our children. He stays right here in Ghana… sometimes he ignores my calls. I am not supposed to tell him to cater for his children, he knows his responsibilities as a father.”

The mother of two who was almost on the verge of breaking down during the interview said that it has been “me and the children all along”.

Tima Kumkum said, “The separation began when I took seed with my second child, it was all due to some misunderstanding. I couldn’t say he cheated but things didn’t go well with us. I moved from Koforidua to stay with my friend when I was pregnant… I didn’t know the whereabouts of my husband as at the time I was carrying our child but after my safe delivery he resurfaced, that was during our separation in 2014,” she revealed.
READ ALSO: Kobi Rana: Pay us back the millions we pumped into promotion – Angry Kobi Rana to Ghana Tourism Authority
She again recounted an incident in her life where the mother of a man she later entered into a relationship with after her divorce refused to allow his son to marry her because she already had children.

“His mother said she doesn’t understand why his son will marry a woman who already has two kids from a previous marriage.”

Despite her failed attempts in finding true love, Tima says she is willing to give love a second chance but under the condition that the man must accept her children.