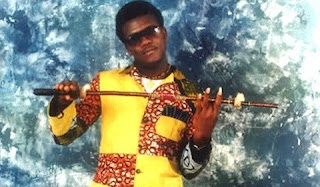 The 13th year of the passing of the late Ghanaian music icon, Terry Bonchaka, was commemorated on Sunday, October 30 at the La Cemetery in Accra where he was buried.
As part of the activities to mark the commemoration, the manager of the late Terry Bonchaka, Reagan Mends, together with the Boomgi Man (Bonchaka Look-alike) and some friends of Terry cleared the tomb area and laid a wreath in honour of him.
Speaking in an interview with razzonline, Reagan Mends indicated that, the clean up exercise at the graveyard is an annual event to spearhead the 15th year anniversary where international artistes would be invited to mark the day.
“Today is exactly 13 years our great brother, friend, leader and the finest artist I have ever managed died. To show that we still love him, we are here at the La cemetery where he was buried to clean up his tomb and keep the surroundings of his graveyard clean.
“This is an annual event we started from 2014 and is to spearhead his 15 years anniversary in 2018 where international artists would be billed to perform at a musical concert to mark the occasion,” he said.
The exercise was sponsored by the late Bonchaka’s mother, Charlotte Adjetey.
Known in real life as Terrence Nii Okan Adjetey died in a motor accident on October 30, 2003 after performing at the Akuafo Hall week celebrations at the University of Ghana.
He was popular within a short time after his first song because of his novel way of singing, his Africanness and his trademark dance.
Some of his hit songs are Ghana Ladies, Puulele and Zoozie.
Watch excerpts of the clean-up exercise and the wreath laying below: