PROFILE: Wiz Khalifa Yells at Paparazzi for Blocking Him From Getting Laid 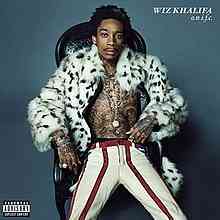 Wiz Khalifa was setting up some post-club skins last night (Nov. 4), and he would have gotten it too, if weren’t for those meddling paparazzi.
TMZ cameras spotted the high-minded rapper coming out of Crush in New York City by his lonely. But that wasn’t supposed to be the case. Apparently, he had lined up for a certain young lady to leave the club with him. But when the flock of cameramen were spotted outside the venue, plans had to be diverted.
“Y’all just fucked up everything,” said the “See You Again” rapper jokingly while getting into his awaiting ride. “I’m trying to get some bun. Y’all roll up flashing all them cameras and shit. Young man can’t get no pussy,” he added before slamming the car door and riding off.
Wiz was much nicer during his last run in with the paps. Two weeks ago, he handed out free weed to the people filming his every move while he attempted to roll up in a car.
“Y’all gonna miss somebody else coming up out of here filming me rolling weed and shit,” he said. The cameraman then commented on the Pittsburgh rapper’s powerful pack of kush, with Wiz noting, “Yeah I know you can smell it, cause it’s that good shit.”
He then added “people like you guys” are the target demographic while handing out nuggets of his own brand of reefer to all those who wanted one.