Protests have begun across the country in response to Donald Trump’s election win, chants of “Not my President” ringing out from New York to Oakland. Meek Milland T.I. each participated in some of the protest marches, Meek encouraging anti-Trump chants in the above Instagram video. He had previously commented that the election results, “shows you the world is at a trifling place! And it also shows you that entertainment can make a sucka seem superior!”
Below meanwhile, T.I. shared video from outside Trump Tower, raising a middle finger to the building. “‘She got more votes’ ‘we reject the president elect’ The people ain’t goin for it….I’m right here wit em!!!!,” he wrote. Additional videos show the crowds demanding change, with T.I. saying, “This ain’t supposed to be how people react to the election of the president. This ain’t what we built up for, this ain’t what we about. This some bullshit.”
Catch footage from the protests above and below, with Trump set to take office come January 20. As the results became clearer, T.I. took to Instagram to share his thoughts and feelings, writing, “I swear on my life, If I could’ve done more I would’ve. We all deserve better. We just gotta live through this & prepare ourselves for what’s next.”
For some, what’s next is a call to action and activism, Meek and T.I. each joining the people in expressing their dissatisfaction with the election results. Hip-hop at large seemed to shake its collective head at Trump’s presidential victory, a gallery of reactions included further down. 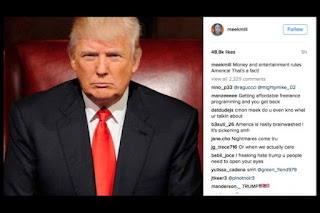