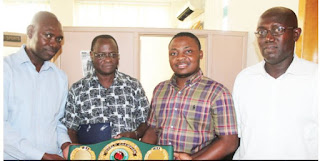 IBO title belt arrives in Accra
Prince Randy Opoku-Afriyie (2nd right) presenting the belt to Graphic Editor, Mr Abayateye
The International Boxing Organisation (IBO) Lightweight Championship belt for the winner of the November 25 fight between Emmanuel “Game Boy” Tagoe and Fernando David Saucedo arrived in Accra last Monday.
Tagoe, who holds a World Boxing Association (WBA) International Lightweight title which he has defended twice, improved his ranking and got the nod to fight an Argentine of repute at the Trust Emporium, Bukom Arena, in Accra.
Ghana has been without a world champion in the sport for over seven years and Tagoe will have the chance to put the nation back in the limelight after Richard Commey’s world title shot over a month ago saw him losing controversially to Robert Easter Jnr.
According to the Operations Manager of Baby Jet Promotions, Prince Randy Opoku-Afriyie, his outfit had secured approval for the bout and had also paid all the necessary fees for the fight to take place.
He, however, disclosed that Saucedo is expected to arrive in the country on November 18 with his trainer who happens to be his father, as well as his brother and uncle who will be at his corner for the fight.
Opoku-Afriyie told the Daily Graphic that Team Baby Jet is confident of victory come November 25, with “GameBoy” proving a tough boxer ever since they took over his management four years ago.
He confirmed that UK-based referee, Michael Alexander, will be at the centre of the bout on the night, with Allen Matakane, Terrance Makazula and Michael Hook being the judges for the fight.
Andiel Mateka will be the IBO fight commissioner, while the President of the Ghana Boxing Authority (GBA), Peter Zwennes, will be the resident commissioner.