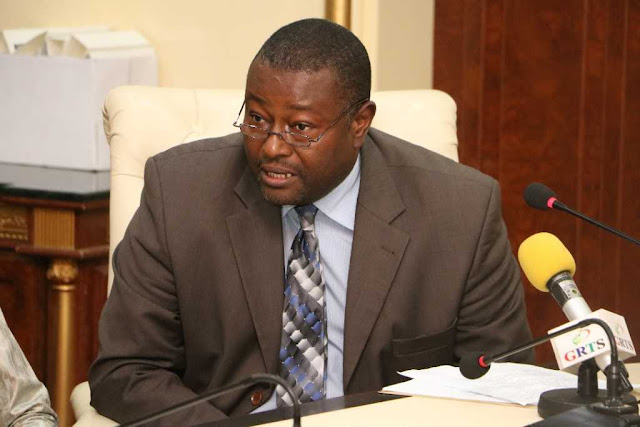 The Chairperson of the Gambia Human Rights Commission, Mr. Emmanuel Daniel Joof has said Ghana has an obligation to ensure it gets justice and compensation for the 44 Ghanaians who were unlawfully killed in the Gambia in 2005.

He urged Ghana to re-open an investigation into the unlawful killing and ultimately seek the extradition and trial in Ghana of named perpetrators of the gruesome extrajudicial killing, adding that where this is difficult, Ghana should put pressure on the Government of the Gambia to seek the extradition of perpetrators who are not in the Gambia to face justice in The Gambia.

“The Ghanaian authorities should also seek the extradition and trial in Ghana of named perpetrators who may not be on Gambian soil but have been implicated in the gruesome murders. Or where this is difficult, the Ghanaian authorities should put pressure to bear on the Government of the Gambia to seek the extradition of these perpetrators to face justice in The Gambia.”

The Gambia Human Rights Commissioner was speaking on the topic “Justice for GH44: A Shared Responsibility of Ghana and the Gambia” at a symposiumto mark International Human Rights Day in Accra on December 10. He emphasized that it is the shared responsibility of Ghana, the Gambia, National Human Rights Commissions of Ghana and the Gambia and civil society organizations to make sure that justice is done in the killing of 44 Ghanaians and others and that the families of the victims get a closure which is also based on justice.

Mr. Joof said failure to get justice and compensation for the victims and their families will perpetuate impunity, which must not be allowed.
“There cannot be impunity for such hideous crimes. It cannot be condoned nor excused. We must send a strong warning to perpetrators and would-be perpetrators that the Gambia and Ghana would not stand idly by while human rights are violated with impunity or where justice eludes victims or their families for lack of commitment. Yes, We Too Can!!”, he said.

Mr. Joof’s call on Ghana to ensure justice and compensation for the victims and their families comes in the wake of testimonies bythree Gambian soldiers at the ongoing Gambia Truth, Reconciliation and Reparations Commission (TRRC) that they participated in the extrajudicial killing of Ghanaians and other West African migrants on the orders of former President Yahya Jammeh.

President Nana Addo Dankwa Akufo-Addo said Friday he knew from his fact-finding visit to the Gambia in the wake of the killings that the Gambian authorities were complicit in the extrajudicial killings and that following the testimonies by the soldiers he had called Gambian President Adama Barrow to ask that he takes action against the named perpetrators, to which Barrow asked him to give him time.

However, the coordinator of the Jammeh2Justice Ghana campaign, Mr. William Nyarko said in a follow-up interview that President Akufo-Addo should consider his  phone call to President Barrow as a first step in diplomacy and not an end in itself adding that Ghana should initiate a formal process by writing to the Gambia to re-open a joint investigation into the unlawful killings and ultimately seek the extradition and trial in Ghana of the named perpetrators starting with the three soldiers who are in the Gambia in accordance with the Memorandum of Understanding Ghana and the Gambia signed in July 2009 to arrest and prosecute the perpetrators.

Mr. Nyarko who is also the Executive Director of the Africa Centre for International Law and Accountability (ACILA) commended President Akufo-Addo for initiating discussions with President Barrow for justice for the Ghanaian victims but said a lot needs to be done by Ghana to ensure that the victims are also provided an effective remedy including adequate compensation.

Another speaker at the symposium, Justice Emile Short, a former Judge of the International Criminal Tribunal for Rwanda, and former Commissioner, Commission on Human Rights and Administrative Justice (CHRAJ) also called for justice and effective remedy including compensation for the victims, adding Ghana must seek the extradition of the perpetrators to stand trial in Ghana and the victims and families paid compensation.

Justice Short called for support for the survivors and victims’ families to bring a lawsuit against Gambia for compensation.
“The survivors and victims’ families must be supported to bring civil action against Gambian Ex- leader, Yahya Jammeh and the soldiers who participated in the killings should be brought before International or regional courts such as ECOWAS court of Justice in Abuja, Nigeria and the African court on Human and People’s Rights in Arusha Tanzania”, he added.

The symposium was organized by the Jammeh2Justice Ghana Campaign, a CSO coalition formed to advocate justice and compensation for the survivors and victims’ families of the massacre of the Ghanaians in the Gambia in 2005.