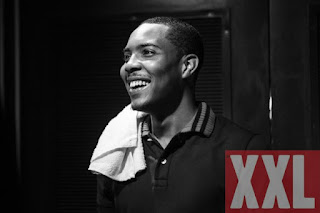 Lauren Gesswein for XXL
Last week, Chicago rapper and 2016 XXL Freshman, G Herbo , hit the streets of New York City for a quick press run to discuss his
upcoming project with producer Southside. During his stop at the XXL office, the Ballin Like I’m Kobe creator took time to shed light on the 2016 presidential election.
For Herbo, he’s choosing not to vote for the next U.S. president. Before anyone knocks him, the rapper has his own reasons for skipping out on this election, but it doesn’t mean he’s not encouraging the youth to get out and vote. The 21-year-old artist simply wants voters to make a difference amongst themselves and their communities first before relying on a presidential candidate to make a difference.
While Herbo’s stance may be a bit different from many other rappers out there, like his fellow Chicago native Vic Mensa who will head to the polls on Nov. 8, he’s definitely not the only rapper or U.S. citizen that feels this way. A few months back, Shad Moss, better known as Bow Wow, also expressed that he would not be voting in the election this year. Another rapper who’s been vocal about not voting for either Donald Trump or Hillary Clinton has been Killer Mike, who supported Bernie Sanders during the presidential primary.
XXL caught up with G Herbo to get his thoughts on why he’s not voting for either presidential candidate and if he’s kept up with the race thus far. Check out Herbo’s thoughts below.
XXL: Have you kept up with these elections and are you voting for any of the presidential candidates?
G Herbo: I’m in tune with the elections and what’s going on, but personally, I don’t want to vote because I feel like everything that’s going on as far as politics in the outside world, if you don’t have a certain mindset where you gonna want to uplift yourself and uplift the people around you and your family, there’s no need to vote anyway ‘cause if you gonna vote for Hillary and go back to doing the same negative, ignorant shit you doing on a daily, that’s not uplifting us as people and it’s really killing us as people — mentally and physically, you know what I’m saying? All of the above.
So if your mindset is not there, there’s no point of you voting or not voting, you know what I’m saying? And I feel like I just want people to understand and get on board. Like everybody is so crazy about voting. They did the same thing with Obama and it feel like poverty has increased, so if you not trying to make that difference yourself, because only we can do it, you know what I’m saying?
Hillary is not gonna come and personally touch us and tell us, “This is how you need to live as the people. This is what you need to do,” and even if she does do that you’re not gonna listen because she doesn’t come from where we come from. She don’t understand the way we think and the way we live so I feel like us as the people, if you’re not gonna come together to try to make things better, there’s nothing that Trump or Hillary can do for us.
Although you’re not voting, do you still encourage the youth to go out and vote?
Yeah, I encourage kids to go and vote. If that’s what you believe in, and if you believe that voting is going to make a difference and you trying to make a difference with the reason why you voting, go ahead and vote, but that’s my own opinion. I’m my own man, you know what I’m saying?