In the words of Former President, Jerry John Rawlings, Mr. Adom-Otchere “wakes up every day to speak nonsense”. 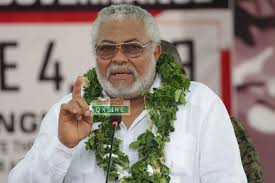 Mr. Rawlings, whilst speaking during the commemoration of the 31st December, 1981 Coup D’etat in Winneba sought to clear the air on differences between private capital or capitalism and socialism.
To do this, he cited how corruption had overtaken some sections of the country including the banking sector, under the Acheampong regime.
READ ALSO: Alert: Latest Trick Kidnappers Want to Use On You. Becareful When You Go Out
Just Friday, April 17, 2020, Television broadcaster, Paul Adom-Otchere rubbished claims made by Dr Zanetor Rawlings that food meant for the vulnerable in societies were being shared on partisan basis.
The journalist, while hosting Good Evening Ghana ‘warned’ the Klottey-Korley legislator to stop misbehaving.
In furtherance of his ‘attack’ on the MP, he advised Zanetor to learn from how her parents; J.J Rawlings and Konadu Agyeman-Rawlings conducted themselves when they were leading the country.
Read the story orginally published on January 1, 2020 by Ghanaweb.com below


Former President Jerry John Rawlings has chastised host of Good Evening Ghana, Paul Adom-Otchere, saying that he always spews out nonsense on his television programme.
“That small boy called Adom-Otchere or something wakes up every day to speak nonsense,” he said.
Addressing a durbar to climax the 38th anniversary of the 31st December Coup D’etat at the Winneba Lorry Park on Tuesday, Mr Rawlings indicated that he will one day take his time to show the differences between private capital or capitalism and socialism.
He explained that people would realise that from America through to Europe, there is accountability with the practice of capitalism.
“When we say we are practising capitalism in Africa, then we must be careful because the leaders tend to steal from the masses,” he added.
Read Also:          Google leads tech charge to work from home
Recounting the circumstances that led to the 1981 coup, Mr Rawlings stated: “During the Acheampong regime, the banking sector, especially the Ghana Commercial Bank, was plunged into unimaginable corruption”.
He further observed: “The bank served as an avenue for cronies and a particular ethnic group to feed fat on loans without collateral. Sadly, these loans were never paid”.

He said further, “A two-man committee established then to look into the fraudulent activities of the bank had their activities come to an abrupt end when one of the members was killed and burnt under mysterious circumstances. How bad could the situation have been to warrant such a heinous and atrocious crime in an attempt to conceal their misconduct? These and many more wicked and morally disgusting actions were common place”.
“It is however unfortunate that some have chosen to siphon the negatives, leaving out the overwhelming gains made by these interventions of the people. The two interventions, 1979 and 1981, were not about Rawlings. They were the effects of the mood of the country and the mood of the people. In telling the story, the context and the circumstances cannot be discounted or overlooked,” he stressed.
Rawlings averred that an explosion of human rage in Ghanaian history, meant to teach us not to treat fellow human beings with disrespect, is being distorted by persons who lack credibility.

“How can we decline to the extent of losing our morality and sense of discernment in even appreciating and identifying people of value and integrity?” he quizzed.