The Communication Directorate of HE Mike Oquaye Jnr.’s campaign has exposed the vile propaganda tool being employed by Hon, Sarah Adwoa Safo and her supporters against her opponent in the race for the Dome-Kwabenya NPP Parliamentary Seat. 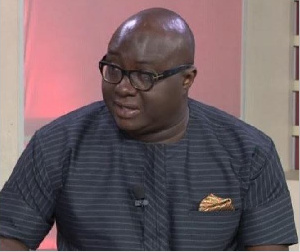 Several of such propaganda was launched against HE Mike Oquaye Jnr. in an attempt to discredit his chances and to win sympathy for votes but all seemed to have failed.
The latest was a publication in which Adwoa Safo claimed Mike Oquaye Jnr. is after her life.

READ ALSO: Ken Agyapong reveals Old Register will gain NDC millions vote, Find Out the number
This was in reference to an incident that occurred two weeks ago when some people snatched the Dome Kwabenya Voter Album during an exhibition process at the Chairman’s residence.
Meanwhile, the Communication Directorate of HE Mike Oquaye Jnr.’s campaign condemned the false publication in The Ghanaian Publisher with the caption on its banner headline “Oquaye’s Son Is After My Life – Adwoa Safo,” and exposed her ill agenda against her opponent.
According to the statement, the said publication is false and must be treated with the contempt it deserves.
“How can a scuffle which ensued at the house of the Chairman over a snatched album by a Supporter of Adwoa be construed as a threat to her life? Does Adwoa live in the House of the Chairman? How come her life feels threatened after two weeks of an unconnected incident, where no one was even hurt?” the statement indicated.
“We wish also to inform our Cherished Polling Station Executives and the general public that, Oquaye Junior has not tasked any of his supporters nor would ever task any of his supporters to besiege the Constituency Chairman’s residence nor any other person to cause mayhem,” the statement said.

According to the Communication Directorate, the supporters went there because they were told that the album was taken to Chairman’s house, and not to look for the MP.

READ ALSO: Money, women and juju: Street boy opens up on daily ‘hustle
It noted that the fabrication of false information by Adwoa Safo’s supporters is nothing but a ploy to create sympathy for votes and to seek campaign funds.
Although the Communication Directorate of Mike Oquaye Jnr. Promised its unalloyed assurance to all Polling Station Executives of their commitment to do Politics of Real Issues as far as our Constituency Parliamentary Primary Election is concern in Dome Kwabenya, they said, they would not be deterred away from any Childish and Communist Inferior Propaganda from unscrupulous people.
“Our quest to fight for Polling Station Executives to liberate them from the challenges they are facing is Essentially Critical and our CORE MANDATE as well and we shall execute same for all to be happy,” it said.
Notably; the said false publication preceded similar false alarm last Friday, May 1, 2020 when a supporter of Hon. Adwoa Safo, Alhaji Ibrahim threw the whole constituency into chaos by raising false alarm that Supporters of Mike Oquaye Jnr. knocked one Mr Borga NIE down with a motor bike.
This was however established to be false when the same Alhaji Ibrahim rescinded his false cry and apologized on the same WhatsApp platforms where he earlier gave the false alarm.
However, speaking to supporters most of who are delegates at the scene, they indicated that the dirty strategy being employed by Hon. Adwoa Safo must stop since it is dishonorable on her part to be engaged in such vile propaganda against her opponent.
According to Ntim Gyakari of Dome Kwabenya “Adwoa is desperate.”
Meanwhile, Lawyer Mike Oquaye has so far ignored all lies told about him and refused to comment.
He just said he remains focused because the Battle is the Lord’s.