Cecilia Marfo should be in mental hospital – Rasheeda Adams

Businesswoman and feminist, Rasheeda Adams, has described Prophetess Cecilia Marfo as a mad woman who should be seeking treatment at a mental hospital instead of being entertained as a prophetess.

Her criticisms of Prophetess Cecilia Marfo come after Prophetess Marfo snatched a microphone from colleague gospel singer Joyce Blessing at a public event and supposedly prophesied that she should make amends with her estranged husband even as God uses her for His work.

Her supposed prophesy has been roundly condemned by many social media users who continue to chastise her for causing the singer much embarrassment at such a public place.

For Ms Rasheeda Adams, Prophetess Marfo’s actions mean that she is mad and came straight from “borla top”, and definitely should not walking about with normal people.
READ ALSO: Tima Kumkum: I haven’t heard from the father of my children in 4 years
“Mad woman straight from the borla top. She should be in a mental hospital but religious people be like “come to us”. This one shouldn’t be walking around with normal people,” she said.

Meanwhile, the Prophetess is yet to comment on the reactions following her supposed prophesy about her colleague saying “My daughter, if you will listen to me, go back and take your marriage. I called you with love and so you should know the life you have is not yours.

“I’ve made you a Queen so listen to me and go back to your husband. I’ve sent you already. Lady, go and take your husband, my spirit is using you,” Cecilia Marfo stated. 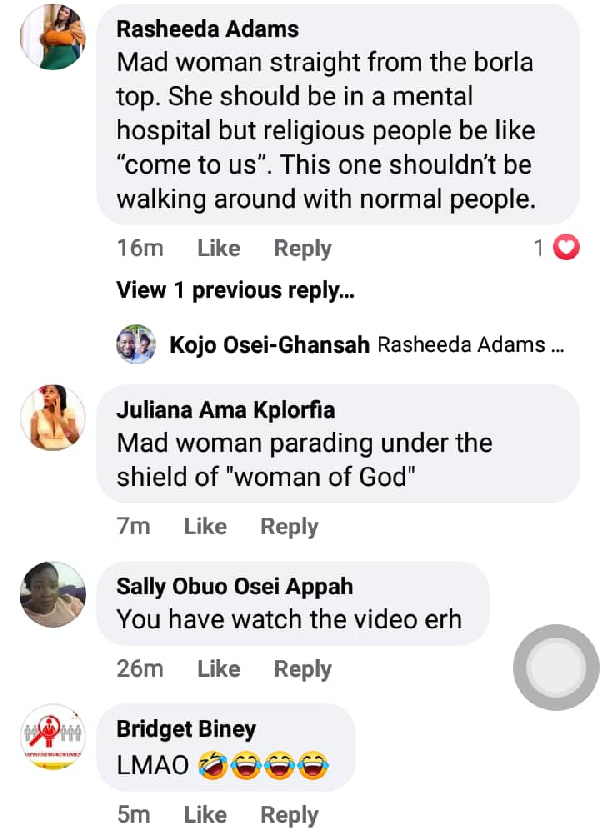