BREAKING NEWS: Beatking Raps as Donald Trump on “You Going Back to Africa” 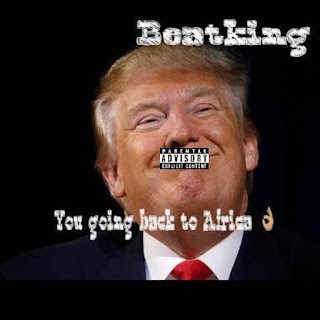 Beatkingunleashes a new song called “You Going Back to Africa,” on which the Houston native raps as if he’s president-elect Donald Trump.
Throughout the nearly three-minute song, Beatking uses Trump’s voice inflection and raps about sending African-Americans back to Africa in an overtly racist manner with phrases such as “Juju on that cotton.” According to Beatking’s Twitter account, the song is meant to be comical. You can listen to “You Going Back to Africa” below via AudioMack.
“I’m Donald Trump and my dick small/I see Mexicans and I get pissed off,” he raps, before later spitting, “I don’t give a fuck, I don’t give a shit/You thought I was gon’ lose to a bitch?/Fuck nah, I ain’t a fucking woosie/You call her Stephanie? I grab her by her pussy.” The song is wild, to say the least, but falls in line with Beatking’s humorous side. It’s not all laughs for him, though; at the end of the song, he admits, “But on some real shit though, it’s all fucked up now. Like this nigga won. Kinda gotta laugh [to keep] from crying.”
In case you missed it, check out Beatking’s most recent project Club God 5, which dropped back in March. The 20-song mixtape contains production from TM88 and features from Gangsta Boo and Short Dawg.
DOWNLOAD