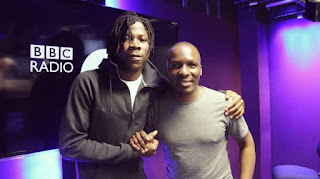 The latest Ghanaian artiste to join DJ Edu on Destination Africa on BBC 1Xtra this Sunday November 13 was Afro beat/Dancehall star Stonebwoy.
The Award winning singer had the opportunity to speak on various matters concerning the rise of his music and brand since he broke out some few years ago.
Describing what he does as “Afro Dancehall”, a trend he stated has also been picked up by artists like Burna Boy, Patornking , Baby Cool and others, Stonebwoy divulged that he believes he’s to be credited for coining a description for that style.
‘’ I had the opportunity to test what I could do, I took it and pushed it forward. What I do is Afro Dancehall, I remember giving it that name here some years ago before everyone one picked up on the style, brothers like Patoranking, Burna Boy, Baby Cool and others. Ever since I said that in 2012, we’re now seeing several other artistes go in that direction,” he stated.
There’s no doubt that sounds from Africa, mainly “afro beat’’ continues to peddle the continent to the rest the music world and is making tremendous impact also. Stonebwoy who represents that trend largely surged that it is so mainly because of energy and other epic richness in the music.
“I believe that people can relate with the energy, they can also hear Dancehall as well as the Jamaican patois and that kicks them up. They can also hear the rich African language too, I feel a blend of all these is a good energy on its own to persons who can relate.’’
According to the singer the new sounds also cuts across people from the Caribbean, the whole of Africa and even Europe and received positive comments from likes of Morgan Heritage, Kranuim Demarco and others.
He also paid homage to veteran Ghanaian hi life pioneers including ET Mensah, Gedu Blay Ambulay, Pat Thomas Afro Moses, Osibisa and several others for creating rhythms like the palm wine rhythm and also giving an uncopied identity to Ghanaian music, a line he believes the new cats are towing now.
“5 or 10 years ago, you couldn’t pick up a song and have everything like Hi life, Reggae, Dancehall, Afro and all that in it. I’m grateful to all the people who are into that trend, young ones like myself who got inspired by all those legends.’