Three songs in and the thesis of Anloga Junction  – Stonebwoy’s new LP, which arrived on 24 April three years after Epistles of Mama – comes into sharp focus: he’s a country boy with the benefit of world travel. The album is a representation of this vantage point.

It is one thing to christen a project, and another for the songs to truly manifest its title. African pop has long been plagued by album names that bear no correlation to the songs they house. Stonebwoy himself has at least on one occasion been culpable of this. This problem likely stems from the culture of impetuously amassing singles and then shoving them under an ornamental rubric once the artist feels compelled to release a collection. So it’s a relief that Anloga Junction adds to albums that are truly worthy of their name.
The sonic synthesis dispensed on the new 15-tracker is overwhelmingly toothsome, worthwhile, and yet, unsurprising. Musical enmeshments are hardly a new attribute to the BHIM Nation honcho.

They are primary to his style. He’s always been modern in that way. Thus, Anloga Junction is not the prodigious new product it was advertised as  – not in its entirety, anyway. Rather, could it be a sister LP to Epistles of Mama(link is external), only in fewer songs and a smaller guest list?
It serves as an obvious perpetuation of Stonebwoy’s quest to prove himself as a global brand, another opportunity to brandish achievements: the first Ghanaian to do this, the only Ghanaian to do that, the one Ghanaian deserving of laurel X.
It doesn’t take from its prognosis as the biggest album of the year. Stonebwoy is among the country’s top three musicians. The stage names of the other two begin with the same initial as his. They are also conspicuously absent from the project. Add that to the fact that the other two S’s released albums just last year, so they are unlikely to release new LPs this year, and the prophecy becomes a simple observation. 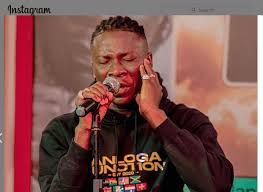 Anloga Junction subsumes all other 2020 releases.
Setting aside his mania with the history books, and as far as pop songs go, Stonebwoy is a proven vocal artisan; an adept melody merchant. The aural filigree inherent in his larynx sets him apart from his peers. By himself or when he pairs up with renowned stylists like American chanteuse Keri Hilson, his canoodling partner on ‘Nominate’, Tanzania’s Diamond Platnumz on ‘Black Madonna’ and maestro Kojo Antwi on ‘Nkuto’, the colour in his voice shines through with directness.
READ ALSO: Keri Hilson expresses excitement over featuring on Stonebwoy’s ‘Anloga Junction’ album
Dance leads this album. No surprise here, too. Dance is Afropop’s rule of thumb. If the dance tracks work, the album works. Stonebwoy enlists 13 of the most trusted producers around, some his long-time allies (iPappi, MOG, StreetBeatz), others fresh acquaintances (Phantom, Andre ‘Dre’ Harris, Spanker). The joints whose BPM aim for rapid footwork are also the ones that command the most joy – see ‘African Party’, ‘Good Morning’, ‘Ever Lasting’, ‘Critical’, and the smooth ‘Motion’. Featuring Jamaica’s Jahmiel, the number attests to a longstanding virtue of Afropop: you don’t need a ballad to broach the philosophical.
There’s also a suave groove to be celebrated in ‘Bow Down’, the Nasty C-aided, chest-thumping track that rides on emphatic drums and hi-hat confetti.
The album closes out with ‘Strength and Hope’, its sole reggae song. Doused in spiritual impetus and Solomonic counsel, it echoes the thick emotion of Stonebwoy’s other submissions in that genre. One gets the feeling that he’s most meditative on reggae instrumentations.

Overall, the verdict on Anloga Junction falls into one of two groupings: it is either Stonebwoy’s best work, or his most innovative. The former is an easy enough argument to make: it is his most articulate, most rounded entry since his debut in 2012. Epistles of Mama is his most ambitious in terms of length and features, but that’s where it stops.

He’s always known how to conjure singles, but not as lucky at curating albums. Of the two categories presented in this paragraph’s first sentence, the latter is harder to defend: if you’ve followed his career, there’s nothing unique here – melody, dance and vocal range have always underscored Stonebwoy’s craft.

Where’s the innovation, then? Perhaps it resides  –  not in something as obvious as a template flip  – but in a natural versatility that we now take for granted, and the sustenance of Stonebwoy’s unbroken artistic presence, recognisable as much in his earnest Ewe vibes as when he sounds off in avid patois.